HEMP and Radio Frequency Threats to Government and Industry:

The purpose of this paper is to give a brief description of High Altitude Electromagnetic Pulse (HEMP), Electromagnetic Pulse (EMP) and High Energy Radio Frequency (HERF) phenomena. This article will explore the devices that create harmful EM radiation, their uses, and possible threats to national electronic infrastructure by the application of these devices. There is some confusion in the public sector as to how EMP works and what exactly it can do, and this article will attempt to address that issue.

EMP (ElectroMagnetic Pulse) is created as a byproduct of a nuclear explosion. A nuclear detonation produces an immediate flux of gamma rays from the reactions within the device.

Through a phenomenon known as Compton recoil and electron scattering, the gamma rays excite molecules of air at some distance from the blast, which then produce large number of high energy free electrons. When this occurs at high altitude the electrons are trapped in the Earth's magnetic field, which creates a coherent, oscillating electric current in the atmosphere. This in turn produces a highly charged, rising electromagnetic field called HEMP.

The damaging effect of HEMP to electronic equipment has been noted since the early 1960's. At 21:00 hours on July 9, 1962 a high altitude nuclear test called Operation Starfish Prime took place about 400 km over Johnston Island in the south Pacific. This was a relatively low-yield (1.45 megaton) missile-launched airburst at that created effects on Hawaii including an artificial 7-minute aurora. Power line surges caused well-documented damage to street lighting, blowing fuses and tripping burglar alarms on Oahu, and telephone service was disrupted on the island of Kauai. Honolulu was 800 miles from the epicenter of the blast. 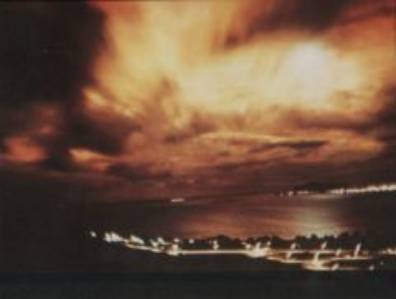 The EMP wave produced by such a blast can travel hundreds of miles and any metal conductor such as a telephone or power wire, water pipe or ducting can act as an antenna, collecting the charge and directing it into sensitive equipment. A ground or low altitude nuclear explosion will also produce an EMP event, only on a greatly reduced scale. EMP will also enter unshielded buildings and affect interior conductors, although at significantly lower levels.

When EMP energy enters a potentially vulnerable system, it can cause a variety of adverse effects. These effects include transients, resettable or permanent upset of digital logic circuits, and performance degradation or burnout of electronic components. The collected EMP energy itself can cause malfunction or device failure directly, or it can trigger the system's internal power sources in unintended ways, causing damage by the power sources within the system itself.

A major concern is that a high-altitude burst, detonated a few hundred kilometers above the surface of the Earth, can subject an enormous area to HEMP. The immense footprint of EMP can therefore simultaneously place at risk unhardened military systems as well as critical infrastructure systems including radio and telecommunication networks, power grids, transportation systems, fuel pipelines, banking systems, civil emergency systems and so forth. Systems that worked after the event would still be suspect, as they would be difficult to test and may have become unreliable.

It has been stated that if a multi-megaton weapon were to be detonated 400 kilometers above Omaha, nearly the entire contiguous 48 States would be affected with potentially damaging EMP radiation.

Note that the ability to create a high-altitude nuclear explosion is at this time probably well outside the technical expertise and budget of a terrorist group to create. Even if a terror group somehow got their hands on a nuclear device they would probably use it in way that would be simpler, less costly and have greater emotional impact than a high-altitude detonation.

A rogue nuclear nation, however, could develop the ability to create a delivery system that would place a device at a strategic altitude. "We have been woefully inadequate in designing a response," said Rep. Curt Weldon, R-Pa., who has warned of the United States' vulnerability to EMP attacks for more than a half-dozen years.

The threat is greater than ever, Weldon said. Today 30 or 40 nations have Scud missiles, and a growing number of nations are on or have crossed the nuclear threshold.

North Korea has the missiles and the nuclear weapons, according to Weldon. Iran has the missiles and may soon have the weapon. "If I were a terrorist, this is the kind of technology I would look at," Weldon said. With a small nuclear weapon and rudimentary missile launched from a ship loitering off the U.S. coast, terrorists "could shut down civilized society," he said.

A single strike of this nature, could absolutely cripple the country's infrastructure, and would do so without the direct loss of human life due to the blast. There would be no destruction of buildings and little radioactive contamination, but this would do far more overall damage to a nation. There would also be fewer political implications than the detonation of such a device directly over (or in) a population center.

On a somewhat smaller scale, there have been numerous articles written about new weapons that are being developed that create a targeted EMP blast without using a nuclear detonation to create it. The popular term for this device is an "E-Bomb".

Used against us, these types of weapons are regarded as "asymmetrical" threats as they use a comparatively low level of sophistication and cost compared to the havoc they can wreak to unprepared forces. It is alleged that the United States used a type of E-Bomb in the preliminary phases of the second Gulf War.

An E-Bomb is created by use of a flux compression generator (FCG) which is in essence a copper tube packed with conventional high explosives and mounted inside a conductive coil. The coil is charged by a bank of capacitors just prior to detonation. Without going into detail on how the device works, a FCG converts explosive energy into microwave energy and produces a ramping charge similar to the one produced by a nuclear explosion, only on a much smaller footprint (hundreds of yards vs. many miles). Again, this device is probably outside the hands of a terror organization, but is within the capabilities of any advanced nation. Russia has done a great deal of testing of EM devices and is considered a leader in the field. It has been alleged that they have even created EM weapons the size of briefcases and hand grenades.

Other potential threats that have been discussed but are difficult to verify are High Energy Radio Frequency (HERF) weapons- devices that use a pulsed charge across a wide band of frequencies to disrupt electronics. A Joint Economic Committee Meeting on Radio Frequency Weapons was held on Feb. 25, 1998 wherein a series of experts in the field of RF warfare gave detailed statements. The overall consensus of the testimony was that 1) RF weapon technology is being researched by several nations, including the United States n>2) There is an increasing interest in RF weaponry and its development as an asymmetrical threat. 3) Increasing dependence on microprocessors combined with the steadily diminishing size of the devices is increasing the vulnerability of systems to RF across the board. The sophistication of modern electronic equipment combined with falling costs and ready access to construction data are bringing the day of the home-brewed RF weapon closer.

A recent article from Germany indicates that a group of individuals have designed and tested a mini EM device they call the "RFID Zapper". RFID are the tracking microchips currently being used for inventory control; by veterinarians to "chip" dogs and more recently, executives and Mexican public officials for identity verification. The zapper is made from a disposable camera flash capacitor attached to a home-wound coil, and they claim this device can short out RFID chips if laced in contact with the chip when energized. One may expect to see refinements on this design as curiosity-seekers begin experiments.

There is little beyond anecdotal evidence to indicate that more powerful HERF devices are currently available to the public or actually work at significant distances, however the prospect of a ranged HERF-style beam device pointed at a data center, hospital or control system installation is an alarming thought.

How can I protect myself and my business?

There are few options available to shield existing systems from EMP. The cost to add adequate shielding to new construction is prohibitive, and retrofitting older facilities to resist EMP is very expensive. In essence, anything to be fully shielded from EMP must be placed within a Faraday cage- a room or container entirely surrounded by metal mesh or plating, connected to an exterior grounding system.

Protecting live building equipment or electronics connected to outside wiring is complex. Each power wire, antenna (like Bluetooth or Wi-Fi) or conductive connector must be individually shielded and grounded. This is not practical for most commercial computing applications, but there are a number of EMP hardened data centers commercially available where shielded space may be leased for collocation of critical IT infrastructure.

Bear in mind that EMP only affects active electronic components like integrated circuits, power supplies, and transistors. EMP will NOT harm magnetic or optical media that has been previously written to, although if a magnetic drive was being written to at the time of the event it could destroy sectors of a tape or hard drive and damage or destroy the write heads.

All is not lost in an EMP event if certain measures are taken previously.

Due to the high cost of incorporating a building-wide EM shield, EM shielding may be incorporated into specified "safe" areas as long as care is taken to also shield all doors, windows and penetrations. Local EM protection can be achieved somewhat affordably. A professionally manufactured 36" x 48" Faraday cage costs about $3,000. 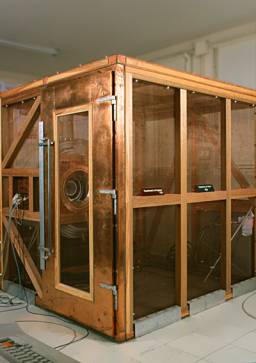 Homemade RF shielding is an inexpensive means of protecting equipment that is not plugged in, and non-networked. Placing a laptop or emergency radio in a Faraday cage (which can be as simple as a tight-lidded steel garbage can or 55-gallon drum) is sufficient to protect critical backup equipment. Another alternative is to place them a significant distance below ground. Obviously, this will not work for powered or online devices, so businesses or entities with a reason to be concerned about an EMP event should have a shielded facility available. 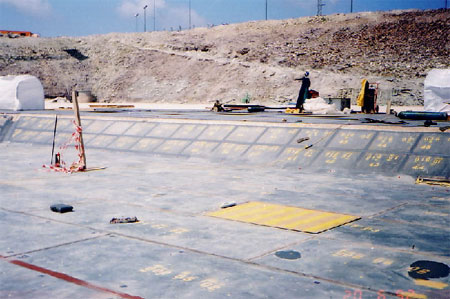 In summary, EMP and HERF threats are viewed as somewhat esoteric by the overall population. However, the Government and military has taken the stance that due to the enormous collateral damage to electronic infrastructure that would be caused by the use of such devices and the steadily increasing availability of the technology to manufacture them, HERF and EMP devices represent a serious potential threat. Continuity planners should be aware of this hazard and be prepared to monitor for new developments.